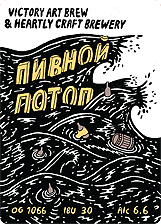 "The Beer Flood" is our collaboration brew with the Heartly Craft Brewery from Lipetsk. We decided to brew together on autumn of 2014 and the idea for the recipe came from the sad event happened two hundred years earlier on 17th of October, 1814: that day at Meux's brewery of London (also known as Horse Shoe Brewery) the dramatic incident had happened. The huge wooden vat with porter (the beer of choice for many many people at that time) was broken. The competition for the largest vats and volumes between the brewers resulted in a tragedy where 270000 imperial gallons (more than 2 million pints) were freed and the liquid gushed out of the vat to the street taking the lives of 8 persons and severely damaging a number of houses. We have researched a number of the historical recipes and decided to brew a porter of that time, the time when the black malt was not even invented. All the porters had brown, muddy colour. Of course it's impossible now to fully replicate the recipe because of malts and hops of that time are not available but we tried to make the most sensible substitution of pale, amber and brown malts. The wonderful English Fuggles hops are used in that historic brew. Our porter will be a good match for meat dishes, chocolate desserts, but English workers used to be the major porter consumers advise to drink it on its own.

You are welcome to taste our interpretation of history.