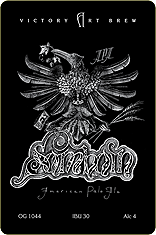 Samhain beer is first brewed on November, 1st, hence the name meaning the Celtic New Year celebrated at this day. We were planning to brew American pale ale which is however quite close to its original and more traditional style - English pale ale: balanced session beer which you can drink all the evening over warm conversation with close friends. We have looked into the history of APA style and found a compromise - we've brewed a version of APA relevant to the period when this style was born (70-80th years of 20th century), when American brewers wished to create something similar to British bitters but due to the limited access to British hops they had to use local varieties. Samhain APA is not an extreme beer - it is very drinkable and has very delicate aroma and taste. It's a beer for every day with bright amber colour and pleasant aroma of citrus, formed by American hops varieties Amarillo and Cascade added at the latest stages of boiling and dry hopping.

Very light body, dryness and certain bitterness in taste and aftertasting - what else is required for long evening?